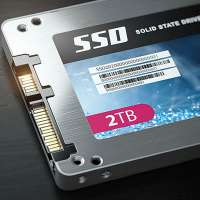 As we continue our computer buying guide with part three, we’re diving into the topic of storage space. As a general rule, modern gadgets have a few available options in terms of storage - not to mention external storage options - but the brand and version of the device can have an impact on the amount of space available. As you select your desktop or laptop, its storage capacity is crucial to consider.

In the past few decades, data storage technology has leapt forward, as a brief comparison of capacity to time passed can show us. Take the standard 3.5-inch floppy disk, and its 1.44 MB (megabyte) capacity. While this was enough to hold large text files, this wasn’t even enough to contain an MP3 file on a single disk. Compare this to the typical CD, which can hold about 650 MB, or a DVD’s 4.7 GB storage limit (which equals that of 3,342 floppy disks).

How Your Storage Needs Vary by Intended Usage

Before you decide upon a storage device to use, you should take the time to consider what you will need from your solution. For instance, if the computer we’ve been putting together is going to be introduced to your workplace’s network, it’s likely that there is a central location or cloud solution that is used as a primary data storage. In this case, your device won’t need much onboard storage - basically, just enough for the operating system, any non-cloud-hosted programs you use, and some extra space for file storage. You’ll want to invest a bit extra in your storage if your computer is for personal use or a home office - especially if you plan to use it for video production, as the specific files types involved will require dedicated storage.

What’s the Difference Between HDD and SSD Storage?

Your storage solution will be made up of at least one of these two kinds of devices: hard disk drives (HDDs), or solid-state drives (SSDs). Each have their pros and cons, which will come into play depending on your situation and your plans for your new device.

HDDs are the legacy storage components, having been used for thirty years. By leveraging spinning magnetic platters and an arm to read data from and write data to this platter, they work quite similarly to a record player, albeit at a much, much, much faster speed.

While HDDs have high capacities, they aren’t the most energy-efficient, and tend to be very fragile - both reasons that laptops frequently eschew HDDs. However, they are still cheaper than the alternative.

SSDs don’t have any moving parts, with any and all data recorded electronically. While they have historically come at a higher price point than an HDD, there are many benefits to balance this out. They are hardier and more reliable than a hard disk drive, work faster, and (due to their lack of moving parts) deal with less wear over time - which cuts down on their failure rates.

The major downside to a solid-state drive is the cost/capacity ratio, and how quickly higher-capacity drives can get to be expensive. For reference, as of this writing, a HDD with 3 terabytes of storage costs less than a SSD with a third the storage.

Your required storage will greatly depend on the intended use of the device, as we touched on before. How much sense would including an SSD make? If your PC isn’t used for many intensive tasks, or your data is stored on the office network, you may be able to get away with as little as 128 or 256 GBs of storage.

If you’re designing a computer for your personal use, it makes more sense to invest a little more into storage, getting between 512 GB and 1 TB. In some cases, this may not even impact the total price of the machine all that much - especially not compared to the impact of the CPU or RAM.

A desktop meant for a home office (and therefore, without a server or network-attached storage device to keep data in) is probably going to need some extra storage space. Combining an SSD to run the operating system with a HDD for general data storage has been shown to be an effective strategy to get the most value from your new device. This setup would be particularly beneficial to someone creating a gaming PC, as these detailed programs can quickly fill up vast amounts of storage. The same can be said for those who need to store a lot of media files, like photos, videos, or music, on the device. Even a casual user could find themselves running short on storage space unintentionally.

When All is Said and Done...

Our recommendation is to use an SSD as your computer’s primary drive, potentially augmenting it with an additional HDD to make sure you have enough storage space for your files. As you weigh out your options, avoid settling for the cheapest one out there - you’ll regret it if your data winds up lost. Of course, whatever storage option you choose, you should always maintain a backup of your data.

Techworks Consulting can help you go through the steps of this series, helping you to acquire the computer that best fits your needs. For our assistance, call us at 631-285-1527.